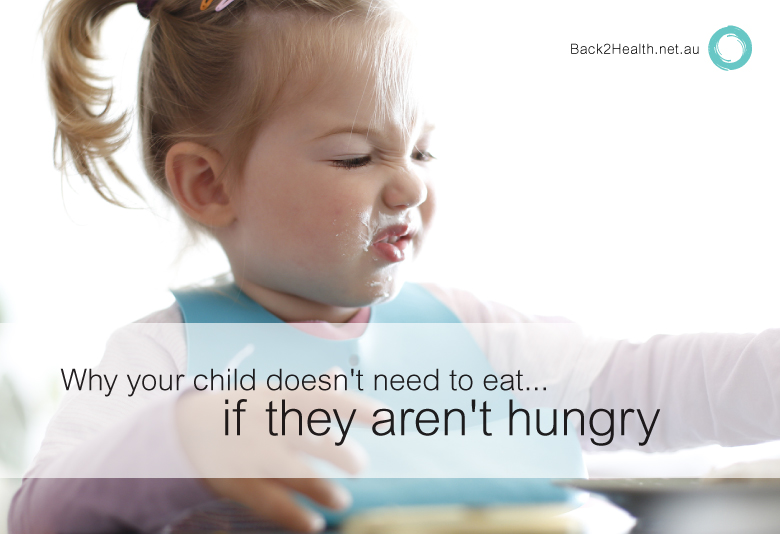 Most of us grew up being told we weren’t able to leave the table until all the food on our plate was finished, right? Who now finds them themselves trying to encourage, cajole or even force their child to eat – even when they aren’t interested?

Currently one in four children in Australia is now classified as overweight or obese. In the US studies show that 70 per cent of Americans and 40 per cent of children are now overweight. It’s more of the same in the UK with new research from the University College, London showing that parents may be feeding their babies and toddlers larger portions than they need; another British study found that one in 10 parents are regularly serving up adult sized portions to kids at mealtimes.

Despite what you’ve probably always been told, we don’t need to all eat three meals a day – it’s even fine for some kids to skip breakfast if they aren’t hungry. Everyone has a different body constitution and digestion, so while one child may have a kapha body type (based on the elements of earth and water) his sibling may be vata (air and ether). A kapha child may need to eat light in the morning and get hungry mid morning – this is totally normal and feeding them a big breakfast makes them sleepy and will make it hard for them to concentrate. You’re actually much better off letting little Sally go to school with just an apple in the morning, rather than forcing her to sit down and eat a big plate of food for breakfast.

It’s beneficial to eat your bigger meals while the sun is shining, but it’s more important to teach children to tune into their bodies and eat when they are hungry.

Over-feeding our children, or making them eat when they aren’t hungry, sets them up for all sorts of serious problems later in life (this might be an increased chance of obesity and other adult disease like type 2 diabetes and arthritis). Kids aren’t given the space to listen to their own bodies and to stop eating when they are full.

Things to remember when it comes to children’s mealtimes and digestion:

While children are young, you have a great opportunity to shape their decisions – in particular in the imprinting years, before a child turns seven. When that opportunity passes, it can be much harder to change things – so it’s important to start with a healthy diet and lifestyle early on.

For more information and resources visit our clinic Back2Health